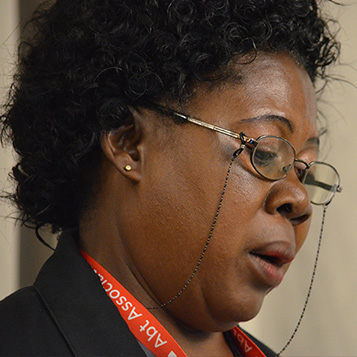 When HIV is criminalized

Rosemary Namubiru is a 67-year-old nurse living with HIV. She is a mother, grandmother and IAS Member. She was wrongfully accused of intentionally exposing a child to HIV while administering an injection in January 2014. The child did not acquire HIV. However, the accusations created a media firestorm, and she was arrested live on television. Originally charged with attempted murder, she was eventually convicted of criminal negligence. However, on appeal, the judge found that her initial three-year sentence was excessive and ordered her release after she served 10 months in prison. This is her story …

I am a registered nurse, specializing in paediatric patients, and I worked in my home country of Uganda and in neighbouring Kenya for 29 years. When I turned 60, I retired from my job in Kenya and I went home with a warm send off. I returned to Uganda and still felt energetic, and so I went to work for the Victoria Medical Centre in Kampala for four years.

In the process of trying to prepare the cannula, it pricked my finger.

On 7 January 2014, a very sick child came to see me. The doctor ordered intravenous medication. When I called out the name, the child came to see me with the mother. I prepared everything required for an intravenous drug. Normally we say, when the child is sick, the mother is sick. The mother was holding the child reluctantly. She was moving the hand up and down. So, in the process of trying to prepare the cannula, it pricked my finger. I went to the sink, cleaned myself, put on a band aid, and returned to attend to the child. On my tray, I had more than one cannula; when I returned, I continued my procedure with the second cannula and I tried and tried, but still the child was restless. Then a colleague walked into the procedure room, and I asked her, "Please, can you try this?" After a big struggle, she succeeded. The drug was delivered and the mother was quiet.

But then the mother asked to see the management. She accused me of using the same cannula that had pricked my finger, even though she had previously kept quiet. The management called me over and the mother demanded to know my HIV status. I agreed to an HIV test although I had only recently found out I had the virus, which I think I got from a patient. In the meantime, the mother called the police.

The newsmen were called, they took photos of me, they wrote headlines, and they used me to make money. It was a very ugly scene.

The next thing I knew the police came and arrested me. I was manhandled and pushed around. The police arrest was so brutal. I was paraded in front of the media, onlooking groups of people, and the police. The newsmen were called, they took photos of me, they wrote headlines, and they used me to make money. It was a very ugly scene. People were calling me a murderer and a killer. I went through so much embarrassment that I wouldn’t wish on anybody.

I was taken to the police station where I was detained for six days instead of the usual 48 hours before seeing a judge. Eventually I was taken to court, and I was told the charge was attempted murder. I was then held on remand and detained for five months. Eventually the attempted murder charges were dropped, and I was found guilty of criminal negligence and sentenced to three years in prison.

We made an appeal in court, and the judge said, “You have no case to answer.” Eventually I was released.

“I struggled a lot because I was associated with being a murderer, a killer, and society shunned me.”

I felt uneasy to go back to my house. I had to look for refuge upcountry with my relatives for 10 months. I struggled a lot because I was associated with being a murderer, a killer, and society shunned me. I was discriminated against and stigmatized. I did not feel safe. I was threatened by people hanging around my house. I didn't know what they wanted from me, whether they wanted to kill me or not.

I returned to my house after the dust had settled. But upon my return, the child’s parents tried to sue me to take my house. The lawyers fought for me and now I just hope the whole thing is over. I have received support from many organizations, for which I am very grateful. Little by little, I am gradually regaining my confidence and my privacy.

“I now know first-hand that stigma, especially among healthcare workers, is real.”

This experience has totally changed my life. My self-esteem is gone and this has tarnished more than 30 years in the nursing profession, which I loved so much. I still struggle to overcome that fateful day when I woke up in the morning to go and save lives, only to be beaten down by the world. I now know first-hand that stigma, especially among healthcare workers, is real. I've lost everything. I had a job, I was the breadwinner for my family, and I belonged to a community. I would give anything to be able to go back to my old self. I still need support to regain my strength, start generating an income again, and feed my family.

It is my hope that by telling my story it will show the real struggle we face against stigma and criminalization. I saw it all, I faced it all, and I don't want anybody else to go through it. Together, we need to fight for others who are experiencing these acts of injustice.