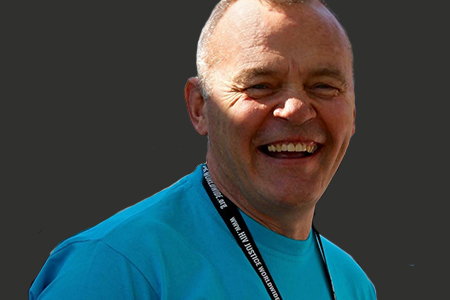 Diagnosed with HIV at age 21

Take us back to when you first learned you were living with HIV. What did it mean back then and what does it mean today?

I was a young student enjoying the daily student life. One day, I collapsed, and when the doctor examined me, she noticed that I had swollen glands. She asked whether I had experienced any weight loss and if I was homosexual. My attempts to come out as gay and claim my identity in public were met with: “You have AIDS and about six months left to live!” Back then, I was referred to and treated as an AIDS “victim” and an AIDS “patient”. I was admitted into a ward in complete isolation with biohazard stickers on the door. Two black plastic bags were taped to the wall – one for my dirty linen and one for my used paper plates and cutlery. The volunteer choir sang Christmas carols in the ward and it was hauntingly reassuring and comforting – even though their voices were only allowed to drift in through the closed door of my isolation ward. I was scared. The way in which the world was treating me confirmed that I was bad and what was happening to me was because of who and what I was.

Today, 30 years later, HIV is very much part of my life. I work and live with HIV and what initially felt like a death sentence has become a calling – for justice, inclusion and acceptance!

Have you ever encountered any HIV-related stigma? Has this changed over the years?

For me, one of the hardest challenges of living with HIV has not been anything to do with the “condition” itself, but rather trying to deal with self-stigma. As a homosexual man, I felt I was now what my family, community and faith had defined as bad, sinful and against the will of God. My punishment, according to many, was an HIV diagnosis. In their eyes, I was “promiscuous”, living a life of sin, a vector of disease. I felt guilty and ashamed. The media fed into this cycle of negativity, using terms such as “HIV victims”, “AIDS sufferers”, “gay disease”, “guilty” versus “innocent” victims. Growing up believing that my homosexuality was wrong left a powerful imprint inside me. It made some part of me an ally of those awful voices who said that my infection with HIV was a deserved judgement upon me. These are the devastating, destructive workings of internal or self-stigma.

Looking back, what has been the one key lesson that living with HIV has taught you?

There are many lessons that I have been fortunate to learn during my journey with HIV. The resilience of individuals and community through the power of solidarity to bring about change is immense.

What role does HIV play in your daily life?

HIV has become me. It informed my activism, shaped my career and drove my passion. I have spent most of my career over the past 30 years working in HIV – whether as an activist, programmer or representative of people living with HIV. I do realize that I am very privileged to have access to good health facilities, proper diagnostics and psychosocial support, if I need it. Taking medication has become a morning routine similar to brushing my teeth. I’m fortunate in that I have been on the same regimen for more than 10 years and have been HIV undetectable since starting treatment more than 20 years ago. HIV is a constant companion, mostly silent and cooperative, but still present. I have a virus in me, which has the ability to make me reflect and be grateful.