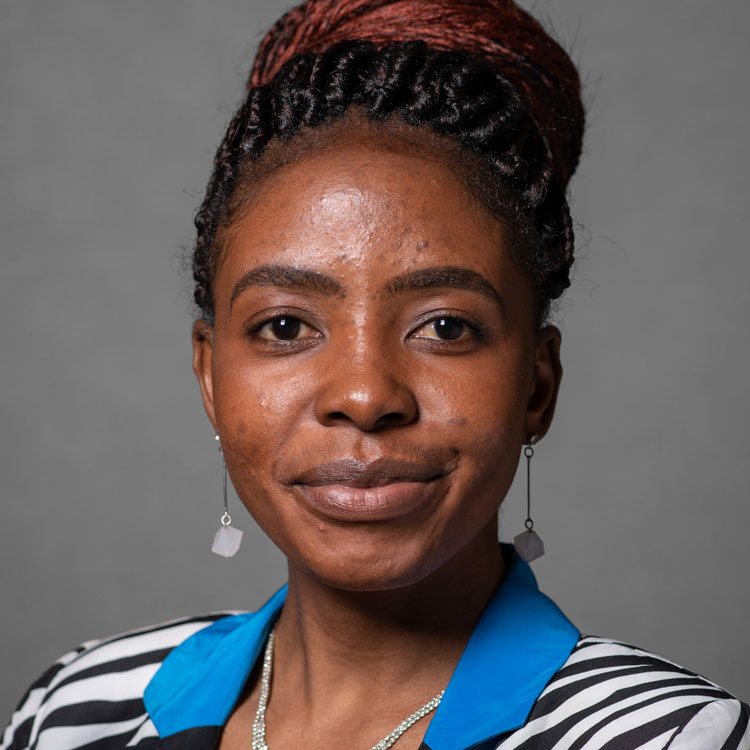 Susan Shumba is a Key Populations Officer at Population Solutions for Health (PSH) in the Masvingo province of Zimbabwe and a dialogue partner at the Global Interfaith Network for people of all Sexes, Sexual Orientations, Gender Identities and Expressions (SOGIE).

Susan has an Honours in social anthropology from the Great Zimbabwe University in Zimbabwe and is currently studying for a Master of Science in Public Health at the University of Suffolk, England. She was trained in HIV care and treatment, HIV prevention, HIV integrated services and care for key populations through the International Conference on AIDS and STIs in Africa (ICASA 2015, Zimbabwe), AIDS 2016 in Durban, AIDS 2018 in Amsterdam, and IAS 2017 in Paris. She holds a certificate of participation and presentation on breaking barriers that promote arranged marriages among lesbian, bisexual and queer women of faith. Susan was also an IAS Youth Ambassador from 2017 to 2019. She has been an IAS Member since 2016. She is an active member of the Global Network of People living with HIV (GNP+) and serves as a trainer and facilitator on HIV prevention and treatment in several African countries.

At a local level, she is a member of the Zimbabwe Young Positives (ZY+), where she supports and promotes health of adolescent girls and young women living with HIV through mentorship and linkage to comprehensive HIV services. At PSH, she mobilizes key and vulnerable populations to integrated HIV services that include antiretroviral therapy, pre- and post-exposure prophylaxis, psychosocial support and TB treatment. Her involvement in advocacy includes lobbying for the rights of key and vulnerable populations at national and international levels. She is also a founder of the Young Advocates for Inclusion Network where she advocates for the inclusion of young women, vulnerable populations and people in rural areas in all HIV interventions.

Susan believes that the IAS has a distinctive opportunity to support implementation of unique and creative initiatives that integrate prevention and treatment of HIV. Moreover, its independence and multi-professional structure make the IAS exclusively positioned to nurture collaborations between national and international initiatives. She also believes that it is of utmost importance to promote programmes aimed at creating the necessary conditions to attract creative young people in scientific research and activism to dedicate their expertise to the progress, testing and implementation of new behavioural and biomedical interventions to curb HIV and AIDS.

As a member of the Governing Council, Susan is committed to guaranteeing that the IAS achieves the goals that are fundamental to its mission to lead collective action on every front of the global HIV response through its membership base, scientific authority and convening power. As a team player on the IAS Governing Council, she promotes advancement of integration between prevention and treatment, closer collaboration among stakeholders, and advancement of the career development of young investigators and activists.